So you’ve been living in Tokyo for weeks, have developed a beer belly from too many nomihoudai nights with housemates and now you’re looking to get rid of it or at least reduce it. Gyms are expensive and joining a sporting club seems kind of daunting as you can barely read hiragana, let alone kanji. Don’t worry, a third option exists that should get you excited and on your bike, quite literally! “Tour de Arakawa” is now your new fitness routine.

First, you`re going to need a bike – and not just any bike! You`re going to need a bicycle that will take you further than your local grocery store and train station. In other words, it has to be one of those without a basket on the front and a cargo rack at the back, like what the international students living in your share house are using (assuming you live or have lived in a share house, of course!) 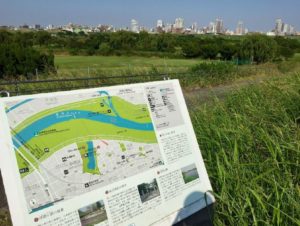 Yes, we`ve all contemplated buying one of those mama chari at some stage while living here as they seem “practical”. Trust me though – you will eventually regret it. I did, and many others did too! Did you ever go to the supermarket in your home country using one of these bikes?

No, you didn’t, right? So, if you didn’t need it there, you won`t need it here either. Major supermarket chains are dotted throughout suburban Tokyo, especially near train stations. Walking there to do your weekly groceries is exercise in itself.

There are also many privately-owned “grandma and grandpa” fruit and veggies stalls likely to be just around your place, so please support your local community by buying some of your food from them. This is a nice way to introduce yourself to the locals and if you become a cheerful regular, you might be given discounts and the occasional freebies.

“But I really want one but can`t afford a Trek, Bianchi, or a Raleigh!” Fear not, I hear you loud and clear! I too have always wanted a top-of-the-range bicycle but never had the funds to afford one. Fortunately, these brands and many others similar can be bought at second-hand stores around town like Hard OFF, OFF House, and Garage OFF.

In suburbs like Nakano, Shimokitazawa or Sangenjaya there are many specialty shops that sell quality second-hand bikes for a reasonable price. Take your time choosing one and if possible, take a Japanese-speaking friend along with you to help with translation and registration. Don’t be shy to ask questions and if you can have a “quick test ride” before deciding on a purchase. 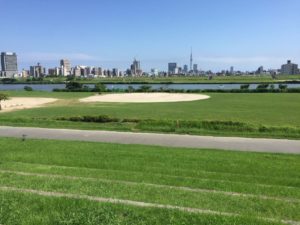 “I don’t like used bicycles, I have a tight budget and I`m not going to be here forever!” An understandable concern for many of us! No worries, Don Quijote to the rescue! By now you would’ve stumbled into the wonderful world of Don Quijote, a store that pretty much sells everything except kitchen sinks.

Cycling enthusiasts will probably never consider buying a bike here but that doesn’t mean they don’t have decent ones for weekend warriors like us. Trademarks like Giant, Hummer, and Specialized are commonly sold here with a price tag guaranteed to make us smile from ear to ear. There are also less-known brands available for sale that not only look good, but are comfortable to ride and also very durable, surely able to pass the test of time. So go ahead and pick one that matches your helmet and sunnies, then prepare to check out a side of Tokyo not seen by average tourists.

The Course (of course)

Now that you’ve chosen a horse, it`s time to join the not-so-world-famous Tour de Arakawa. A race which can attract dozens of cyclists throughout the year starting from dawn to dusk. You don’t need to be part of a team to participate in this event nor have super-human endurance abilities. Your favorite songs saved into your favorite music device and a full water bottle are highly recommended though! 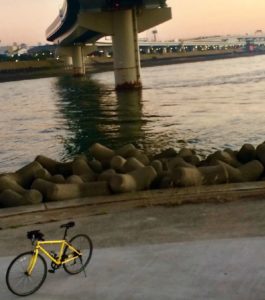 The Arakawa river is extremely long, over 170 km stretching from central Saitama to Tokyo bay. Luckily, the cycling trail is only about 35 km long starting from the northern part of Tokyo, around Kita city all the way down to Koto city on the west bank and Urayasu on the opposite east bank.

There is a healthy debate between riders on which side of the river is more scenic and lively, but personally, I like both sides of the river and usually decide which route to take only upon arrival.

As a beginner, the ride will be a little bit challenging if you decide to take on the whole trail from start to finish. Although the majority of the course is flat, there are several uphill points and corners that requires the rider to drop to lower gears for the smallest amount of resistance. Not having a basket on the front and a cargo rack at the back will make pedaling easier. Not to mention it gives you an opportunity to look the part – as a fellow “cyclist” enjoying the views.

There are distance markers along the track to see your progress and there are also plenty of public toilets and drinking water fountains for those inevitable pit stops. Surprisingly, the “little boys’ rooms” are maintained regularly and much cleaner than others I`ve seen during my overseas travels, with plenty of good toilet paper. And the water from the fountains has yet to make me sick, so if you burn through your water bottle, refilling is always an option.

Spring and summer of course is the best time to join Tour de Arakawa. Those seasons have the best atmosphere, with club sports like soccer and baseball being played by adults and kids alike. Pack a bento box and a picnic rug in your backpack. Then join the many who uses the parks adjacent to the river to chill under the many shady trees.

The rare appearances of local fauna while sitting on the grass is an amazing sight too, that is if you like snakes and rabbits. If tanning in your underwear is your thing, you`re in luck as men of all shapes and sizes do the same along the river bank. Kite-flying fathers and sons, skateboarding teens and music bands practicing under the bridges are all pleasant distractions throughout the day.

During the summer festival season, regular events are held until after sunset, culminating in an awesome fireworks display worth sharing on social media or just with your family members who are missing you.

Yes, the Tour de Arakawa has it all! It`s free of charge, non-competitive and a great way to forget about your daily grind and late health insurance payments. The best part though is that whether you finish first or last, in the end you`ll feel like a winner – with really sore legs.

From Australia
Has lived in Japan for almost 7 years!