What’s the best way to see Japan? You’re likely to get any number of answers to that one- on foot, by car, by train, by Shinkansen- but one other popular (and healthy!) way to get it done is by bicycle.

Have Bike, Will Ride

If you’re like me and can’t drive, a bike will be one of your greatest assets to have in Japan. For day-to-day tasks such as to making your grocery run, going to work, getting to the station, etc. few things top a good ‘ol bike.

Regarding types of bikes, you have some choices: the mama chari (ママチャリ) a kind of simple bike with a basket in the front and no gears often associated with moms; the hybrid bike- not exactly a mountain or road bike, but you have some gears and the look is more sporty- and finally, the specialized bikes (mountain bikes, road bikes, etc.). Whichever you choose is really up to you.

Getting a Bike! And Then Registering It 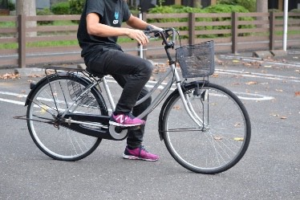 Let’s get ready to ride!

Getting a bike will depend a bit on which kind of bike you wish to have. If you wish to buy a mama chari, you can go mostly anywhere to get one, and they are pretty cheap (sometimes less than even ¥10,000). They can do the job if you don’t have much hill to climb, and you can find them in most bike shops, home centers (renovation centers), sport shops as well as online or in recycle shops/used goods shops.

If you want a hybrid bike or specialized bike, you will need to spend much more and go to bike-specific specialized shops. Some regular sport shops or bike shops might have few models. Also, be aware that if you are 170 cm or taller, it might be difficult to find a frame of your size.

Once you have your bike, it is strongly recommended to register it at your local police office. By doing so, your bike will get a sticker with a number on it, like a license plate for a car. This is mostly in case your bike get stolen (always be sure to lock it), or if you are not careful and park it somewhere forbidden (and it gets taken to the tow yard). It’s with this number that the officials will be able to confirm that it’s your bike. So get registered!

In Japan, if you ride a bike you must abide by the circulation rules. Which in short, are mostly the same as driving a car with a few key differences. The max speed allowed is 25 km/h (15.53 mph). Also, using your headlamp is a requirement at night. Police officers are pretty strict about that, especially in autumn when it starts getting darker earlier and many students fail to do it.

You will sometimes notice that riding against traffic is a common thing. It’s common, but technically not allowed. Riding with two people on the same bike to is forbidden (even if you saw it in manga and anime) and students are often caught doing so. Most younger folks get away with a mild scolding, but don’t expect that kind of leniency as an adult.

You will also notice the difference between the “real” bike riders and everyone else. One of the biggest hints is the saddle height. Most people keep their saddle to the lowest level. It makes it hard to pedal, but easier to keep balance. Since most people go really slow (you could walk beside them) keeping balance is a must. Also, I think it’s really just a fashion thing. The “real” one will have a hybrid or specialized bike, their saddle will be at good height, and they’ll ride on the street, often at max speed. Which type of biker you want to be is up to you!

And now, a little word on bike parking lots. You will notice them mostly around train stations, and most of them are wide open spaces where you can park your bike for free. Be aware though that in big cities, the parking lots closest to the station might be for monthly renters only or charged by the day. If you park your bike in one of those, never forget to lock it! When we talk about locking it, it’s not about locking it to a fence or something, but to just lock the wheels to the frame (front and back) is enough. The mama chari usually already have a lock installed on the back wheel.

The magnificence of Shimanami Kaido!

More and more cities offer a bike-sharing service or bike rental. You can find those bikes mostly around train stations, shopping malls and tourist attractions. Shared bikes cost around ¥100 per hour, but again it depends on the city. Bike rental services work per day, half day or per hour. The fees really depend on the renting service. The big difference between the two is that the shared bikes are parked at automated terminal spaces (like a coin locker) and you leave it at any of the terminals, while rental bikes need to be procured at a shop or counter and brought back to that same counter after use (note that some shops are part of a network, so you can leave it at any partner shop).

So there you have it. Ride carefully and enjoy the roads of Japan! Maybe we’ll cross paths on the bike trail some day!

Images for this article were provided by Mona Baker. Cover image by Dennis P via pixabay.com

From Canada
Has a long, storied Japan experience!